Threadbare, at its heart, is putatively a transcript of a conversation between two older women on a bus about love, romance, and sex. Brookes overheard this conversation and even put out a tweet about it, and was urged to jot down the details. He did and turned it into a comic. However, that's underselling the craft aspect of the comic, which is both decorative and a key element of the emotional narrative. It's formatted as a comic book in terms of images, but each image was embroidered and photographed, rather than drawn. That even includes the word balloons, which were done with green and white thread. The results are surprisingly intimate and erotic, but the format manages an extra level of metaphorical vulnerability and fragility. 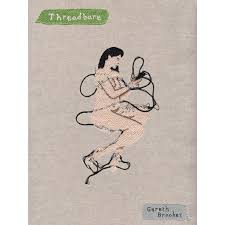 If the conversations themselves were relatively tame, the corresponding images were bluntly sexual. The first story was about a woman having an affair with a married man, as the topic was "when was the last time you were in love?" She talks about having to travel to see him, how exciting it was, but ultimately realizing that he was never going to leave his wife. The images depict connection as well as longing, as a man and a woman in various states of undress have phone sex with each other. Later, they are together and have sex. In both cases, Brookes depicts spidery tendrils emanating from the phone, lashing them together in their absence, but he also depicts each of them literally coming undone. The threads and tendrils act as apt visual metaphors for both sexual connection and emotional unraveling. This is a tragic story, as she realized as it was ending that she was no longer in love with him and would never love again. 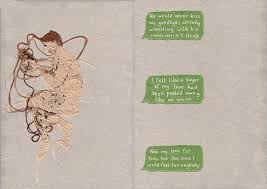 The second story is a more wistful one, as the woman thinks back to an intense teenage romance that simply vanished. His family moved away, and he didn't say goodbye. However, at one point, she thought she was pregnant with his child, and dreamed about this for years afterward--even through her marriage. This is a story more about longing than passion, unlike the first story, save for a single moment of connection where she's imagining being impregnated by him. Even then, her memories and self-image are fraught and tattered. Only a single, final image of him naked lingers in fully-realized form, neatly stitched. It's also the last image of the book, as their reverie ends and they get off the bus, back to the reality of their present-day lives. This comic is a fascinating act of empathy, fully realized in a surprisingly expressive manner, given the medium. 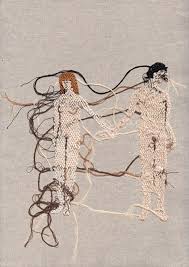