I've been following Ed Piskor's career for quite some time, and he's managed to turn his obsessions into his art. Nowhere is that clearer than with the first volume of what promises to be a five volume history, Hip-Hop Family Tree (Fantagraphics). In many respects, Piskor's theoretical and historical mouthpiece in the book is Fab Five Freddy, the influential graffiti artist who intuitively understood the connection between rapping, graffiti, fashion and breakdancing as part of a cultural whole and their overall vibrancy. This was not a new idea; Richard Wagner created the term Gesamtkunstwerk ("total work of art") to reflect the way that he thought operatic productions must fuse with music to expose greater cultural truths. It wasn't even a new idea in African-American culture, but rather a continuation of what writer Leroi Jones calls "assimilation-revitalization syndrome". This is when a marginalized culture, but in particular African-American culture, creates a new form of aesthetic expression. That expression inevitably is initially demonized by the dominant culture before it is accepted, assimilated and made popular, often at the expense of the form's originators. One could see that play out with blues, jazz, R&B, and rock 'n roll. What was initially different about funk music of the late 60s and early 70s was that it was in part a joyful expression of the gains made thanks to the civil rights movement. James Brown's "Say It Loud, I'm Black And I'm Proud" was the harbinger for a new renaissance of music, fashion, dance, art and literature centering around the communal and improvisational nature of funk music. Once again, however, assimilation came in the face of disco, which took the danceability of certain funk records and fused them with the gay, underground club scene in cities like New York. Putting the music in the hands of producers and taking away venues and jobs for live performers essentially destroyed the funk music, and the crippling poverty and economic recession of the late 70s further stalled gains made by African-Americans. When Ronald Reagan came into power in 1980 and quickly gutted a score of social programs that had been crucial to the development and advancement of the urban underclass, we were left with where Piskor began his book. 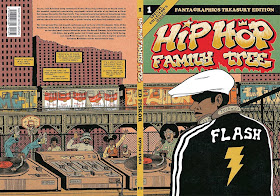 There's no doubt that Piskor is scrupulously accurate about showing the good, bad and ugly of the world surrounding hip-hop and providing interesting theories as to why rap proliferated the way it did at certain times. For example, a city-wide blackout led to some electronics stores getting looted and dozens of people suddenly getting their hands on the kinds of equipment needed to start spinning records as DJs and rhyming as MCs. I do wish that he had provided a little more historical background regarding hip-hop's cultural and economic roots, especially given that many of his ideas and the ideas of those he discusses in the book are rooted in earlier theories and schools of thought. That said, Piskor manages to juggle an insane amount of information regarding key players, influences, flashes-in-the-pan and backroom players in hip-hop's history. What began as a subculture is now simply culture, fully assimilated and established as the dominant cultural force. Every kid listens to rap, lots of kids use Beats by Dre headphones and wear clothing designed by hip-hop artists. Hip-hop is a dominant form of dance, taught at all levels. The story of hip-hop is the story of culture, post-1980. 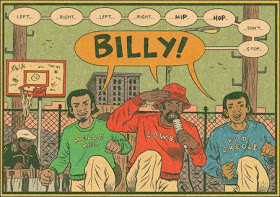 If you've read the strips at Boing-Boing, then you still haven't really read the book as Piskor truly intends. Piskor, a design fiend, is using the exact proportions and cover design of the old Marvel Treasury Editions. The lettering, coloring (love those pre-yellowed pages!), character design and overall dynamics of the book are meant to emulate Marvel comics from the late 70s and early 80s. Indeed, parts of the book look like they were drawn by Sal Buscema or Herb Trimpe. The drawings of key early MC Melle Mel often feature the wide-open mouth and saliva lines common to Buscema's figures, for example. This is something that undoubtedly comes naturally for Piskor, who was trained at the Kubert School. That school generally trains artists to become mainstream superhero cartoonists, but Piskor's interest in underground comics combined with his own specific set of obsessions set him on a different thematic path, even as his character design and interest in creating visually exciting pages remained firmly rooted in mainstream comics. That tendency makes a number of the characters have a certain larger-than-life quality, and Piskor doesn't shy away from comparing hip-hop culture to superhero culture in a back-up strip in this volume. 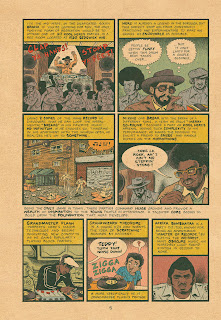 The problem with that approach is that some of his figure work is jarring, with character proportions out of whack, especially when juxtaposing people of different sizes. Piskor also seems to have difficulty drawing children, especially with how they relate in space to each other and adults. There are some pages that simply look wrong as a result of these problems with proportions. For the most part, however, Piskor ingeniously and quickly picks up on each character's distinctive characteristics and plays them up. Rap producer, promoter and manager Russell "Rush" Simmons wore a particular type of hat, had a lazy eye and talked with a pronounced lisp. Piskor mercilessly and often hilariously depicts the ridiculousness of those traits while giving due respect to Simmons' smarts, ambition and sense of timing. The book isn't all about big names and those who would later become big names, though Chuck D of Public Enemy, the future KRS-ONE and Dr Dre all get introduced here, among others, while Russell Simmons' little brother DJ Run is frequently depicted as a background character. Instead, the book focuses on folks like DJ Kool Herc, the first superstar DJ, along with Afrika Bambaataa and Grandmaster Flash. It discusses how hip-hop shows were initially held on basketball courts, rec rooms and other cheap or free public areas as a way of having fun in a relatively safe environment. The relationship between artist and audience was entirely symbiotic and interactive, as MC's literally came up out of the audience to rap while the DJ was busy doing his thing. B-boys would breakdance while the DJ spun records. 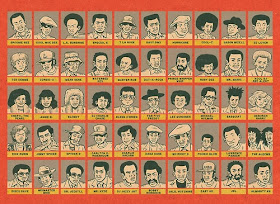 Piskor also gets at hip-hop that was essentially a youth-focused activity, with only a few enterprising older men and women entering the game when they saw that there was money to be made. My favorite character in the first volume is ruthless producer Sylvia Robinson of Sugar Hill Records, the woman who pretty much helped create the first hit rap record out of thin air. Rather than do the legwork to find the best MCs in the New York area, she stumbled upon Big Bank Hank (a minor figure who cribbed rhymes from other, better rappers) and created the Sugar Hill Gang and "Rapper's Delight". The other two members of the group joined simply because they came up to the car where Hank was rapping over the Chic song "Good Times" and had the guts to approach and say they wanted to rap, too. Piskor gets across the importance of the record not as a work of art, but as something that shifted the historical importance from DJs to MCs as recording suddenly became every bit as important as performing. 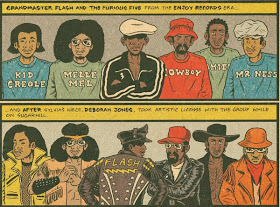 Doing a weekly strip for Boing Boing dictated that Piskor make every page a stand-alone piece. Whether by design or by chance, this structure works beautifully for a comic that jumps from performer to performer yet finds ways to eventually tighten narrative and thematic strings. It also gives the book a propulsive, exciting quality that feels like Piskor is spinning yarns instead of doling out history lessons. He treats the subject with appropriate reverence and gravity but also injects each page with humor, befitting the frequent silliness and lunacy present in hip-hop's early days. For example, the battle between the Sugar Hill Gang and the Furious Five over who would get to use a particular breakbeat came down to them playing a game of football. Pages where we see Grandmaster Flash's reaction to "Rapper's Delight" on the radio are hilarious in and of themselves, as one of the coolest men in the business is agog at this development. Every page depicting rap battles and brutal put-downs is also quite funny and indicative of Piskor's deep research into hip-hop's history and understanding of how important the early bootleg concert tapes were. 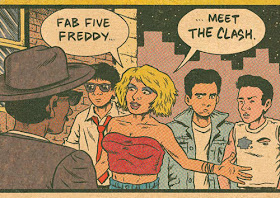 Still, the fact that Piskor spends a lot of time with Fab Five Freddy and his connections to "downtown" art culture and figures like Jean-Michel Basquiat and Keith Haring shows that his main concern is creating that titular family tree. He's fascinated by connections between artists, managers, rappers, djs, egomaniacal and privileged figures like Rick Rubin who turned a love of punk rock and hip hop into a career, and the people outside of hip-hop circles who immediately picked up on its potential and did their best to either further it or exploit (and sometimes both). He's interested in its immediate and multigenerational impact, as the first MCs and DJs had a quick influence on rappers in high school or living with their parents (the stories of Busy Bee Starski's mom pulling him out of clubs were hilarious) but also had an influence on ten year olds as well. This first volume is about creating something beautiful out of nothing, out of creating a tapestry of sound, self-expression and movement with the most limited of tools and equipment. To be sure, there were egos, beefs and exploiters from the very beginning, but there was also the sense of everyone making up rules as they went along. Piskor expertly captures the energy and excitement of the unlimited possibility to be creative in hip-hop's early days, and it's that Marvel-inflected style that gives him a solid set of visual short-cuts that allow him to keep the story moving briskly without losing the reader.
Rob Clough at 3:00 AM