Last Playlist, by Marta Chudolinska. I'm a sucker for "prepping for the apocalypse" stories, such as the film Last Night. This mini is somewhat along those lines, as it focuses less on the cause of the apocalypse (revealed on the final page) and more on the dynamics of a group of friends. The rendering here is simple and basic, as Chudolinska wisely decides against over-rendering and instead focuses her attention on body language and character interactions in space. The result is an intimate, desperately honest set of decisions among close friends, one whose focus is on the small moments because those are all that are available to the characters in question. There is conflict, there are resolutions in the face of oblivion and there is a sense of warmth and camaraderie felt in the waning moments of the world. This comic is modest in its ambitions yet hits every note, and I'd be curious to see more of Chudolinska's character work. 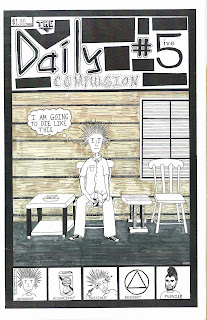 The Daily Compulsion #5, by Nathan Rice. This is a crude, powerful howl of a personal zine. Rice apologizes up front for the seven year (!) delay between issues, but the jumble of stories, diary strips, jokes, flashbacks and vignettes quickly susses out why: Rice was going through recovery for alcoholism, a process he's still clearly square in the middle of. Rice faces up to every demon imaginable in this comic without flinching, including suicide, the uneasy camaraderie found in rehab clinics, stultifying boredom, a loss of identity, abandoning friends because they were uncomfortable with his drinking and much more. It's all done in a slightly detached, jokey matter, which only serves to heighten the artist's sense of loneliness and isolation. Rice's linework is crude at best, but there's an undeniable power and energy to be found on his pages, especially in terms of how he draws himself. Rice's voice as an artist is distinctive and creates a fascinating tension between dwelling in the moments of his misery and feeling a million miles away from it at the same time. 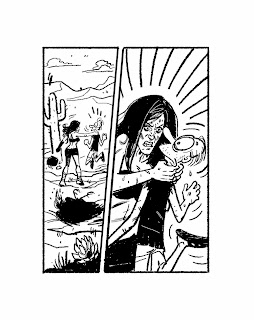 Teej Comix, by T.J. Kirsch. A frequent collaborator of Jonathan Baylis, Kirsch has developed a cartoony, visceral style of his own. This is a collection of dream strips and other oddities. From the cartoony splatter of cow parts in the full-color "Beefed" to the nightmarish scenarios encountered by his character Slim Johnson, Kirsch's dream comics are full of violent, paranoid and bizarre images that are concretized as animals, outdoor scenes and copious amounts of sweat. My favorite story was "la mort et le sable", which involves a woman in furs in the desert and a cartoony, googly-eyed man bringing her water and attempting to kill a crow. The naturalistically drawn woman juxtaposed against the googly-eyed man is a funny, memorable image, even as it draws in Kirsch's preferred imagery of the mysterious, vaguely malevolent birds. It's an interesting first shot at storytelling and takes advantage of Kirsch's versatility as an artist.
Rob Clough at 3:00 AM