There's no question that Luke Pearson is one of the most talented cartoonists of his generation. The sixth and final (for now) volume of his beloved Hilda series, Hilda And The Mountain King, not only caps off the cliffhanger ending of the previous volume but also ties together a lot of narrative threads from the very beginning. NoBrow very clearly knew what they had in Pearson from the beginning, as these books have always been printed at a size that allows his multi-panel pages to really breathe and flow. Of course, the care that NoBrow takes with their color and production values that mark each of their books has always been a highlight of the Hilda series, but the colors are far more muted and varied than in many NoBrow books. Indeed, Pearson uses a lot of negative space on his pages as a way to highlight individual character moments. 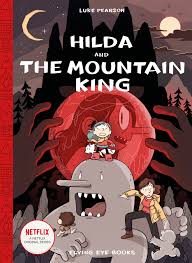 Color tends to dominate many NoBrow books over the quality of the line itself, but that's not the case for Pearson. His beautiful, expressive, and cartoony line takes precedence in every panel. The color simply accents and highlights the line. While his backgrounds and nature drawings are lush and warm, it's his use of gesture and body language in his character designs that truly draw in the eye. Pearson clearly looked at a lot of Chris Ware's work as well as Tove Jansson's, but there's also a lot of Donald Duck in there as well. The only contemporary who depicts panel-to-panel action on the same level is Jeff Smith, but Pearson has a more aesthetically-pleasing style. 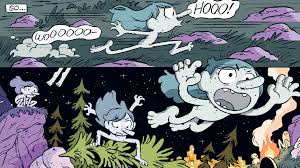 The Hilda books center around the title character, a young girl living with her mother. First, they lived out in the woods in a forest filled with strange creatures like invisible elves, mountain-sized giants, and trolls who turn to stone in the daylight. Their existence and motivations sparked the first Hilda book and became a running part of the narrative, although mostly in the background. The key turning point in the series came when her mother moved them into the nearby city of Trolberg, whose whole purpose was to keep the trolls away. Hilda loves her mother but is also extraordinarily strong-willed, and that tension is at the heart of the entire series. Her mother worries about her and starts to feel Hilda pulling away from her, unwilling to share her life with her. That came to a head in the previous volume, Hilda And The Stone Forest, when they were trapped inside the mountain with trolls. All seemed to end well until the end when Hilda woke up as a troll with the troll-mother they had met, and Hilda's mom dealing with the troll-baby they had met. 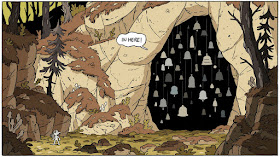 The new volume picks up from that surprise twist and introduces a number of other plot twists while still conveying the sheer joy that Hilda learns to experience as a troll. She misses her mother and being human, but being a troll conveys a little of the wild experience she wants out of life, one absent of responsibility and expectations. Balancing that wild quality with the safety and comfort she feels at home is at the core of the story, as well as balancing fear with compassion and understanding. The big, epic ending simply recapitulates the series' themes: the relationships between mothers and children (but especially daughters) and the desire from all to have a place to call home. Those themes are writ both large and small throughout the series, though this book makes it big and splashy. The final images display the kind of balance that Hilda and her mother achieved with each other in a joyous fashion.
Rob Clough at 3:00 AM