Jillian Fleck's debut book Lake Jehovah is the sort that an artist with a lot to say tends to throw at the world; there are multiple levels of meaning, metaphor and symbol in the comic that take a long time to unpack, along with a complex visual playbook that riffs on all sorts of formal tricks like the use of the grid and repeating visual motifs. Fortunately for the reader, Fleck was up to the task that she set for herself in telling a story of multiple apocalypses, mysterious illnesses, horny demons and talking animals, and a remarkable balance of the absurd and the deadly serious. Along the way, there's a serious examination of the value of poetry, the utility of language in general and a restless exploration of gender and sexuality, It's done with a humane and sympathetic take on all of the characters, no matter their experiences. 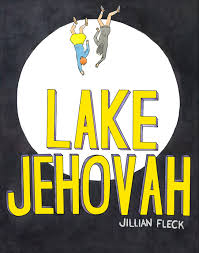 Whether one prefers to refer to it as magical realism or simply deeply symbolic, here's the book's plot. A young genderqueer person named Jay finds ximself diagnosed with Soft Disease, which is apparently a not uncommon diagnosis in a world that's experienced multiple apocalypses up to that point. Jay is constantly worried that xis partner, Mells, is going to leave xim, which in fact is exactly what happens, as Mells runs off with Jay's old professor Asterix. When Jay falls asleep for several months as a result, a number of odd things occur. First, Jay's writings have become a prophecy of the new apocalypse, and created a tourist industry as a result. (This is one of many cleverly sardonic touches in the book.) Jay encounters an old friend who dresses up as a spirit animal to give tours, meets two true believer Apocalypse Tourists, encounters a sleazy poet, the poet's demon drug dealer, a talking fox and what purports to be Jay's guardian angel. In the end, the apocalypse may or may not have happened, but Jay realizes that it doesn't really matter. 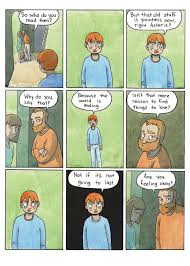 Let's unpack all of this. This is a comic that is primarily about mental illness and how that plays into relationships, real world difficulties and day-to-day survival. Jay is deeply depressed and anxious, exhibiting any number of mental illness symptoms, but most significantly is that of catastrophization. That is, every problem or fear is extrapolated so as to become a worst-case scenario. That depression is closely correlated to feelings of worthlessness and meaninglessness, especially when faced with any kind of perceived betrayal or rejection. Suicidal ideations become common. Anxiety is another major symptom described here as well. The exact diagnosis is less important than the symptoms in terms of the story, but the way they're described it could be anything from bipolar 2 to borderline personality disorder, with the latter seeming more likely. 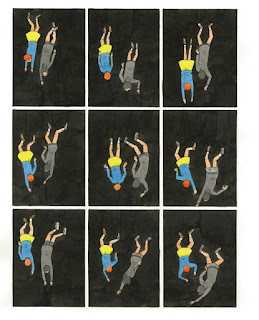 How does this play out in terms of the story? A "soft disease" sounds like an apt description of mental illness. The apocalypses and the sense that the world is ending (especially when Jay's fiance leaves) fit right into that sense of imminent catastrophe, especially the fact that the world has seemingly ended multiple times in multiple ways. Suicide and self-harm are given form in the titular lake, whose name represents the cold judgement of an omnipotent god. When Jay confronts xis "guardian angel" at the end, it's at the bottom of the lake, with the full weight of god's judgment literally on top of them both.

Drugs are a big part of the book, and all they seem to do is magnify one's problems and self-image, not provide answers or refuge. It's no accident that the "guardian angel" avatar is the same lurid, day-glo color as Jay was when xe was on a serious trip; it's a huge ball of rage against everything in the world, especially ximself. There's a grueling scene where Jay in that mode brutally murders a vicious dog, which in itself was colored in the same way and thus feeling the same kind of rage. Meeting rage with rage, Fleck suggests, does nothing to actually address the root of that rage, that self-hatred that comes from a lack of self-worth. 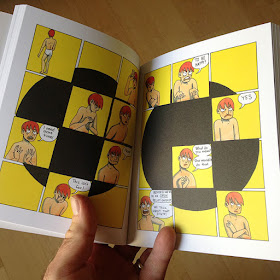 Jay's antipathy toward poetry is another key aspect of the book. Xe hates it because xe regards it as a form of lying, of being indirect in communication. Jay's fiance Mells loves it precisely because some things cannot be expressed directly, that sometimes language is incapable of accurately capturing certain kinds of experiences in a straightforward manner. You have to talk around and through certain things to really deliver the message, which is especially funny because this comic makes great use of comics-as-poetry at times. The repeated use of tiny panels; the use of "rhyming" images to indicate patterns of behavior or portents of things to come and even the use and then breaking out of the grid to get at a sense of disorder are just a few examples of how Fleck's visual strategies reflect poetry, not to mention the heavy use of symbolism.

Another key to the comic is that no one is any more or less a sympathetic figure. When Jay finds ximself with a huge, gaping wound on xis stomach (and I don't believe it's a coincidence that the genderqueer Jay, who has a penis, would develop a wound with a labial shape), the wound winds up being xis real conscience. There are no apocalypses save the ones you make up. Jay's fiance' left because Jay had become mentally ill and was unwilling to recognize this, much less get help. Jay's pathological need to be reassured that a relationship would never end is what caused the relationship to split apart. Sex for Jay was not always a means of connection; it was sometimes a means of escape. Fleck makes it clear that Jay's problems are not imaginary; the world is an awful place in many ways, with toxic landscapes and violence & death lurking in so many places. There's always a personal doomsday that's about to arrive for someone in the world. Jay did have genuine mental illness issues and did have a loved one leave xim. The problem, Fleck suggests is taking those problems and turning them into something far worse, something monstrous.

Fleck's figurework is a little rough in some places, as her characters look somewhere between Archie characters and Simon Hanselmann's, with a strong understanding of how both Chris Ware and Frank Santoro create a page. The use of the grid is central to so much of the story, but so is finding ways to literally destroy it as Jay smashes symbolic shapes. Ultimately, the story winds up being one about self-acceptance, even in the face of one's darkest fears.
Rob Clough at 3:00 AM