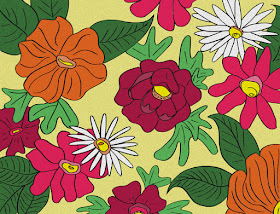 Wallpaper, by Whit Taylor. Taylor's writing and conceptual design continue to grow sharper and more sophisticated. While the small size of this mini was a printer's mistake, it wound up being a fortuitous one. Told from a childhood point of view, the left side of each page is text and the right side is a beautiful, decorative and emotionally resonant wallpaper pattern or some other kind of visually significant pattern. The book's smaller size makes it feel more like a child's book. There are a series of events detailed by Taylor that slowly coalesce into a narrative about her grandmother's increasingly failing health. However, the story is really about the ways in which certain details are important to children on an emotional level that adults simply don't perceive. Indeed, the very title "Wallpaper" colloquially refers to the sort of bland, background decoration that's ignored on a day-to-day basis. Taylor highlights these decorations in a way that is both functional in their depiction and genuinely beautiful as they appear on the page. Her use of color is vibrant without being lurid, and it truly gets across why a child would notice certain colors and patterns. Not all of them are of wallpaper; there's a microscope slide, a piece of pizza and other things appreciated for their aesthetic, rather than their practical value. Even the boring patterns--like the beige the mother in the story ultimately picks out for the kitchen--have emotional resonance. The child was upset by that choice because it was boring, but what she was really upset up was the death of her grandmother, who had a bright color sense. Concealing an emotionally complex story in a simple package is what gives this mini its punch. 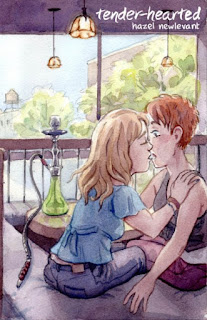 Tender-Hearted, by Hazel Newlevant. This is a thoughtful collection of short stories about relationships and identity. "Finding Place" is the standout of a strong collection, as Newlevant uses a beautiful watercolor wash in a story that connects her sexual identity with her budding interest in comics. The crux of the story is experiencing the difference between a theoretical and even intellectual understanding of identity with the actual experience of that identity. It's about the missteps that can be involved with that exploration, like putting identity ahead of human empathy. However, it's also about the importance of visibility as a creator, passing on information to younger creators or fans desperate for material that speaks to them, embracing both the responsibility and opportunities such a position provides. 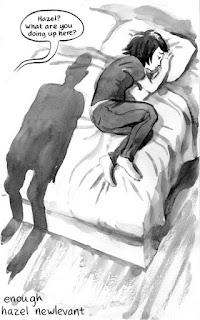 "Apt #105 381 Troutman Street" is about being in a relationship with a self-harming individual, juxtaposed against the simple recitation of the contents of the titular apartment. It's as though the events unfolding before the reader's (and the narrator's, presumably) eyes is simply too much to take in, so there's a default back to simple, context-free description. "Enough" is a story I've reviewed elsewhere, though it obviously fits in seamlessly here. It's about emotional manipulation in a relationship where she was a caretaker, creating dangerous power imbalances and overcorrections. After that black & white interlude, Newlevant returns to color (one of her strengths as a creator) in "Bi-Furious", a story about a conversation she had regarding bisexuality with her mother. It's all about the concept of bi-erasure, and wondering that if she had lived in an earlier era, would she have had the courage to act on that aspect of her sexuality? Newlevant brings up a variety of bi women from recent history as examples, which is all part of Newlevant's larger project of exploring women's sexual identity throughout history, particularly in the arts. What I liked best about this story is Newlevant's willingness to honestly engage with the issue despite its hurtful premise, resulting in a discussion that sheds light (not heat) on the subject. Newlevant's figure drawing is appealingly fuzzy here, though there were times when the way she and mother looked stiff and posed, especially with regard to each other in space. This was surprising, because Newlevant's other figure work looks much more natural and fluid. I'm not sure if this effect was intentional, but it did feel a bit jarring.
Rob Clough at 3:00 AM