There's no cartoonist quite like Meghan Turbitt, as she balances self-effacing humor, frank talk about sexuality, trenchant social commentary and a furiously visceral drawing style that pummels the reader on every page. Let's take a look at her output over the last couple of years. 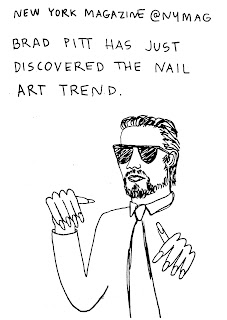 Imagine Caring About This. This is a succession of drawings based on inane facts about celebrities posted as tweets, ads and actual content, with each page featuring a single image. Turbitt has a photo of herself on the cover, and that juxtaposition is key, as she asks the reader why they should care about her or any bite-size bit of celebrity news. The cumulative effect is exhausting and frequently hilarious, like "Tori Spelling was hospitalized after falling onto a hibachi grill at Benihana", with Turbitt drawing her face down and skirt up. 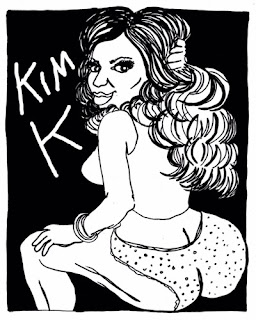 Kim K is about a dumb guy asking Turbitt if she likes celebrity Kim Kardashian's ass, and Turbitt repeatedly says no (almost Green Eggs and Ham style) until she tears up Kardashian's photos, which magically makes her own ass grow in size (not unlike How The Grinch Stole Christmas). Turbitt's penchant for drawing the grotesque and the exaggerated makes her excess of lines a feature rather than a detriment. The distorted figures and scribbled lines all work, because her figure work is ultimately expressive and hilarious. 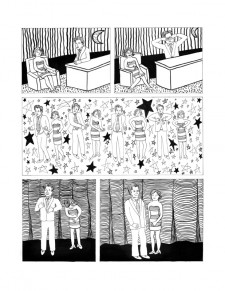 Conan is one of Turbitt's earlier comics, and it truly served as statement comic. She takes the suggestion that her face looks a bit like comedian Conan O'Brien and runs with it, as she imagines appearing on his show and then running through a series of highly graphic sexual positions with him, with a hilarious punchline. Only Turbitt would turn sex scenes into a sort of shaggy dog joke. Turbitt's line here is much sparer and thinner than in later years, and it lacks the visceral quality that marks her work now. It's still hilarious, and the eventual gag was well-served by her line by making it easier to parse than her more dense current style. 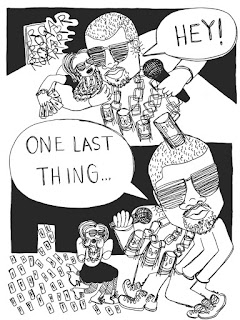 Teach Me How To Be A God, is another shaggy dog joke, this time involving rapper Kanye West. Visiting his "castle" the day after seeing him in concert, the comic has all the earmarks of Turbitt's current style: furious action on each page, a flurry of arms and legs in motion, exaggerated expressions, and unusual page design and a smart use of spotting blacks. The final gag, involving genitalia, is absolutely hilarious in its absurdity, but it's also a remarkably effective piece of composition. As Turbitt has matured, she manages to hide her solid fundamentals in the humorous shock value of her jokes, but it's her eye for composition and page design that make the jokes work. 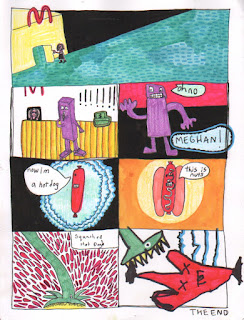 Meghan Goes To McDonald's is a collaboration between Turbitt and her students. Many of these strips are hilarious, like one where a student imagines Turbitt throwing Ronald McDonald in a deep fryer, or another where McDonald is hitting on Turbitt, or another where Grimace is depicted as having huge, purple breasts. While most of the strips are crude (with the exception of one highly detailed drawing that's clearly done by someone who specializes in horror), they are bursting with the kind of unrestrained energy that marks Turbitt's own work. It's fitting that Turbitt chose a highly visible, commercial enterprise for her students to focus on, as it's precisely the kind of target she prefers to mock. 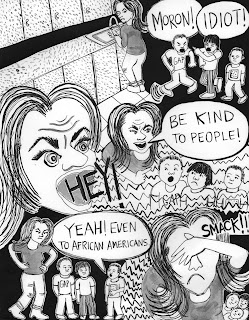 Untitled Gags 2 is as described, and there's a lot of tremendous work in here. My favorite story was "Free Samples", where Turbitt unintentionally said something that could be construed as racist to an Asian woman, and then Turbitt turns that awkward shame into a strip where the woman chops her up and turns her into dumplings. It's the details that make this strip work so well, like the drawings of the specific ingredients and methodology that went into making the dumplings. Most of the gags here are in the self-effacing mold, but Turbitt does the humor of awkwardness differently than most. A situation where a woman asked her if she was waiting for the men's or women's room ended with Turbitt sprouting a huge, erect penis that blasted through her cocktail dress. In "The Perfect Match", Turbitt eats an entire tub of chocolate frosting and weeps over her indulgence until she spots a guy on a park bench eating matches. It's a simple gag, but once again, it's Turbitt's over-the-top stylizations that make it funny: her legs contorting as she eats the frosting, her eyes bulging out after she finishes the frosting, and her exaggerated expression when she sees the match-eater. The strip where she screams at her students to be nice to each other feature those trademark zig-zag lines that indicate conflict or excitement. 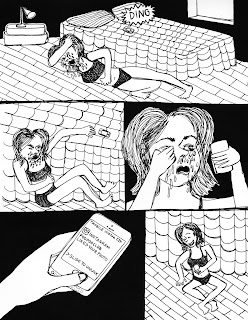 RIP Meghan is another collection of gags and drawings. Here, it's evident that Turbitt was perhaps influenced by Lisa Hanawalt's early work, in that it's in turns absurd, deeply personal and frequently grotesque. The scene where Turbitt pulls out an absurdly huge breast and jumps on it to squirt milk into her coffee is a great example of that grotesque absurdity. The strip where she talks about dating someone much older than she was for eight years making her feel like an old person is remarkably self-revealing, and not just because she draws her old self with ridiculously drooping breasts. A strip where she's weeping on the floor, only to get relief when she gets a "like" on Instagram. My favorite strip came from a guy she was having sex with tell her that he read Conan and told her to call him that. In that moment astoundingly inappropriate moment, Turbitt depicts herself dying with hilarious facial contortions and coming back as a vengeful ghost. Most of these comics have short stories or story fragments, and I'd love to see a larger collection of the best of them as well as more recent work.