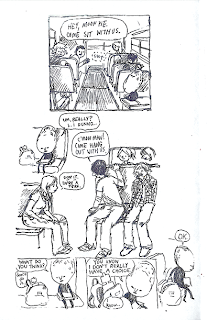 Misc., by Liz Valasco. This is a mysterious little six-page mini about a bullying incident on a bus involving a kid with a Moon Pie for a head. Valasco's cramped, scribbly style is a good match for the story that begins with the absurd, moves into the tragic and ends on a mystical note. The Moon Pie kid, it is hinted, is some kind of immortal being who nonetheless appears to be a child and who goes to school with other children. Valasco's dialogue is pitch-perfect in the way that she depicts a particular kind of cruelty, one that's almost inquisitive and inviting, and then turns on a dime into fantasy material. It's solid work. 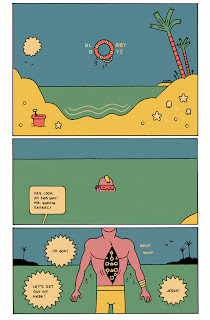 Blobby Boys, by Alex Schubert (Koyama Press). I've been seeing dribs and drabs of this comic in anthologies, minicomics and various other places for quite some time. Even this slim, collected edition feels like yet more prologue to a larger, denser work. I'll repeat what I said in an earlier review: "Schubert is a funny cartoonist whose work seems heavily influenced by Dan Clowes' early Eightball work. There's a large array of gag-oriented strips that take on cultural detritus that feature cartoony, grotesque characters. Schubert also touches on true absurdity in his takedowns of tough post-modernist posing with his title characters, who are literally slime-shaped people who get into all sorts of mischief, including killing members of a rival band after a gig at a club. With characters like Aging Hipster ("Have you heard the new Arcade Fire?") and Punk Dad as well as Schubert's own observations like Paper Blog and a review of a bizarre musician called The Spoiler, there's a tremendous amount of skill and polish on display here for such a young cartoonist." There's additional material in here involving Cyber Surfer and Killer Driller, wherein Schubert invokes some Michael DeForge style "drippy drawing" in a more overtly humorous and deliberately stiff style. There's also an extended strip featuring Art Critic, another Clowesian send-up that aims to generate more laughs than particular satirical points. Indeed, even if many of Schubert's comics have an aesthetic or cultural point of view and make that point in a forceful manner, the joke is still the thing. His peculiar drawing style transcends his influences as they mesh together computer drawings, graffiti, video games, album cover art and other cultural touchstones outside of but related to comics. I could read another 200 pages of gags set in this particular visual world. 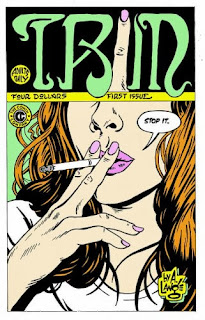 Trim #1, by Aaron Lange. Speaking of Clowes, Lange draws his visual inspiration not so much directly from Clowes but from the sort of art that inspired him: advertising art, romance comics, and junk culture. Lange is a smart storyteller and observer whose work is a sort of second cousin to that of Tim Lane's, as he documents and interacts with people who are outsiders, cast out of and away from society. Take "Vietnam Tom", a story wherein Lange listens to the rantings of a Viet Nam veteran that show moments of clarity and sensitivity in-between moments of sheer, ridiculous madness. Lange keeps it light in this story, setting up the anecdotes as a series of gags.What I like best about Lange's comics is that he has an interest in underground culture without necessarily revering it. For example, "When I Grow Up I Wanna Be Like...William S. Burroughs" takes a wrecking ball to the legendary writer's mystique and hilariously catalogs all of the awful things the writer did and had happen to him. Worst of all: "be read by idiots". 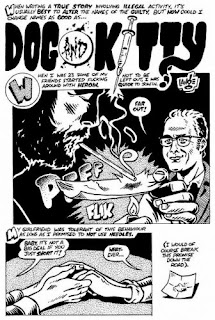 There's no question that the highlight of the issue is "Dog and Kitty", an epic autobio story that reads sort of like a Denny Eichhorn story (or maybe Peter Bagge's Stinky Brown), only one where he makes nothing but bad decisions. It's a story too ludicrous to be faked, as it involves Lange and his burgeoning heroin addiction some time back, and the violent, psychopath dealer he hung out with from time to time ("Dog") as well as his crazed, bestiality-loving girlfriend ("Kitty"). It's a story that involves guns, Nazi fetish porn, accepting an offer to let Dog grow pot in Lange's basement, and the horrible numbness to everything that comes along with being a junkie. Trim has the feel of being an exploitation comic, only Lange is exploiting himself and his own observations and experiences for maximum comic effect.
Rob Clough at 3:00 AM