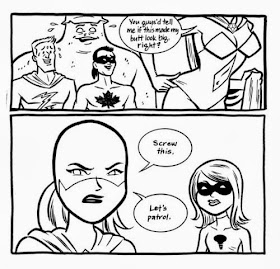 Diamonds Are A Girl's Worst Enemy, by Rob Ullman. Rob Ullman pays most of his bills through his illustration work these days,which is too bad because his clean and appealing style make him an ideal choice for so many other kinds of comics. His comics about hockey, for example, are impeccably researched, funny, fast-moving and a pleasure to simply look at. Of course, Ullman has the distinction of being skilled at a certain kind of cheesecake art, one that seems more honest and refreshing in the way he renders women than the more "realistic" good-girl artists or what passes for rendering women for most mainstream superhero comics. Indeed, this story is about a superhero named "Double Diamond" who's got all the male superheroes going ga-ga over her because of her skimpy outfit and flirtatious attitude. This infuriates the other women on the team, one of whom has a modest figure and the other who doesn't dressing in a revealing fashion despite having the figure for it. Ullman slyly comments on objectification and celebrity culture when the secret identity of a powerful jewel thief is revealed, critiquing both sexist behavior in men and the ways in which women internalize being objectified and use it as a weapon against other women. There is certainly a level at which Ullman is having his cake in presenting these critiques and eating it too in terms of drawing sexy women, but he doesn't go into the realm of bad taste or titillation in this comic. Indeed, take away the content related to sex in this comic and it's easy to see Ullman drawing a successful all-ages superhero or genre comic, given his understanding of body language and chops. 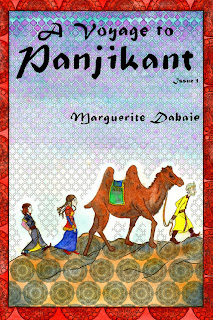 A Voyage To Panjikant, by Marguerite Dabaie. This is the first dozen or so pages of what will be a longer work for Dabaie. It follows a 7th century merchant family from Sogdiana, a country that's now roughly where Uzbekistan and Tajikistan are today. It's a comic that plays to Dabaie's strengths as a storyteller: an attention to detail, especially in terms of fashion; a vibrant but never garish understanding of how to use color; and a level of research that brings a little-known (to most English-speakers, at least) culture to life without bogging it down in mere detail. She's able to do this because she has a knack for creating a vivid family portrait in just a few storytelling strokes. There's the merchant father, patient but nonetheless frustrated by his goofball son. That son, despite his best efforts, can't help but screw up an important sales trip. There's the clearly intelligent daughter who shares her father's sense of frustration but isn't quite in a position to act on it yet. Dabaie offers hints of life in Sogdiana and how merchants have to have a clear understanding of any number of religions and cultures in order to interact with and build good will with them. I'm hoping that the final product will be bigger, in order to show off the intricate nature of her drawings (especially the designs on clothing, which are remarkable) and the impact of her use of color. 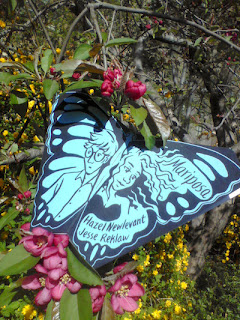 Curio #2, Mariposa and If This Be Sin, by Hazel Newlevant. Newlevant's comics are frequently about gender fluidity in a variety of forms. If This Be Sin, for example, is about the blues singer and pianist Gladys Bentley, who openly performed in male drag and wrote songs about blurring genders and her attraction to women in the 1930s. Newlevant's character design and page composition are both highly effective here, giving the page a certain fuzzy softness, evoking both buried memories and a time that in some ways was hard to believe was real. Though Bentley later reportedly "cured" herself by taking hormones to "become a woman again", Newlevant hints at a lingering sadness in her story, suggesting that the change was a desperate attempt to fit in and avoid persecution. Mariposa, done in conjunction with Jesse Reklaw, is about the parallel narratives of a scientist discovering a new genus of butterfly with ambiguous genitalia and the polymorphously perverse young woman who lives in his apartment building. The mini evokes both Reklaw and Newlevant's love of clever formal packaging, given its butterfly shape and the way the reader must unfold it to create the full effect. The ambiguous ending implies that the scientist himself goes through a process of frequently uncomfortable metamorphosis in order to become something much more beautiful; it can be taken as a moment of magical realism or a metaphorical transformation that sees the scientist understanding that how she lives her life is not so much random or self-indulgent as it is totally embracing a certain kind of freedom of and from identity. 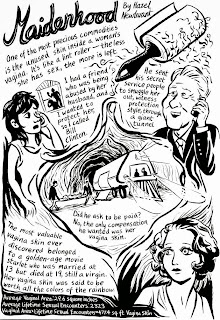 Curio #2 is a collection of one-page strips, sketchbook drawings and other experiments, many of them done in collaboration with others. Newlevant experiments with going small, going big, using a sketchy & loose style, and using a more naturalistic line. Some of the strips are gags and goofs, while others zero in on personal and autobiographical details, like "3 Years of Open Relationships". The latter is a brutally honest self-appraisal of polyamory and the ways in which it can be an emotional rollercoaster. The page design is clever, with some panels turning out to be thought-balloon flashbacks and others acting as mirrors or callbacks to earlier parts of the emotional narrative. "Maidenhood" is a hilarious, weird story that is similarly clever to look at; it has the qualities of a dream comic and an extended period of time thinking about vaginal skin and the mechanics and implications of the decision to have sex or not have sex. Other strips feel more disposable, like "The Royal Matchmaker", which has the cute idea of matching up an alien with someone on earth in what turns out to be a pet relationship; there's a lot of effort to get to a mildly amusing punchline. What's obvious is that Newlevant is very much feeling her way around comics, trying on different styles and working relationships as she attempts to figure out what kind of artist she wants to be. There's a certain restless adventurousness at work in her comics, and it will be interesting to see how she harnesses that ambition.
Rob Clough at 3:00 AM